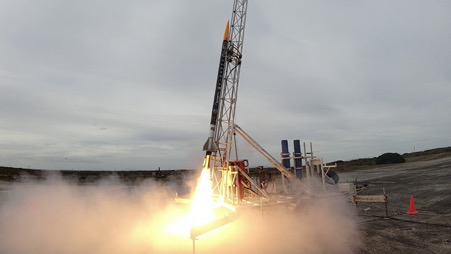 University of KwaZulu-Natal’s (UKZN) much-anticipated Phoenix hybrid rocket test flight at the world-class Denel Overberg Test Range in the Western Cape has been a resounding success.

The successful flight took place on 8 March when a gap in the weather provided suitable launch conditions. The Phoenix-1B Mk IIr vehicle soared to a new high altitude mark for hybrid rockets, beating the previous African record of 10.3 km.

more ‘The team is delighted to see all of their hard work come to fruition with a picture-perfect flight, which exceed our expectations’ said Dr Jean Pitot, the leader of UKZN’s Aerospace Systems Research Group (ASReG).

‘Internationally, sounding rockets continue to play a crucial role in the facilitation of experiments conducted in a wide variety of scientific disciplines, including bio-technology, astronomy, astrophysics, materials science and meteorology, among many others,’ explained academic leader for mechanical engineering at UKZN, Professor Michael Brooks. ‘They also serve as valuable test platforms for aerospace technologies related to commercial satellite launch vehicles.’

The Phoenix-Mk IIr suborbital rocket that was successfully tested was developed as a technology demonstration platform.

After signing the fins pre-launch – a tradition in rocketry research – the team retreated to a mission control blockhouse from where the nerve-wracking countdown was initiated.

At 16h47 Mk IIr blasted off – and the exultant team broke into cheers as the rocket reached a 17.9 km altitude, setting the new African record.

Said Pitot:  ‘The Mk IIr rocket is a high-performance version of our initial Mk I rocket, and demonstrates low-cost and robust construction methodologies coupled with advanced fabrication and propellant technologies.’

Brooks acknowledged the substantial funding received from the Department of Science and Innovation (DSI) for the project.

‘This funding has enabled the development of key expertise in the engineering disciplines of rocket propulsion technology, launch vehicle design and flight dynamics modelling, as well as the development of appreciable scarce skills. It has also enabled unique cooperation between the University and industry,’ he said.

The ASReG team included 18 postgraduate and undergraduate students who contributed to the success of the launch through their innovative research. These students are products of ASReG’s DSI-funded transformation-centred talent pipeline programme.

Dean and Head of UKZN’s School of Engineering, Professor Glen Bright said: ‘This launch constitutes a deliverable on our DSI Space Propulsion Programme funding grant, under the category of technology demonstration.  We are thrilled at the outcome and are very proud of our students whose meticulous work, dedication and commitment contributed to this success.’

The Chief Director of Space Science and Technology in the DSI, Mr Humbulani Mudau said: ‘Excellent work, team ASReG!  You have broken the African record.  The DSI on behalf of government is very proud of this achievement.  Well done!’

Deputy Vice-Chancellor and Head of UKZN’s College of Agriculture, Engineering and Science, Professor Albert Modi echoed his sentiments: ‘Well done Guys! You have put UKZN on the map, we are so proud.’

A delighted and relieved Pitot said: ‘This launch is the culmination of months of preparation.  We had to move an entire rocket team, its launch platform, two rockets, multiple back-up parts, computer equipment and everything that goes with it 1 700 km across the country.  It was a massive undertaking, but the work has paid off.’